You are ten times BIGGER than you think

You are ten times BIGGER than you think

This story illustrates ways in which you are ten times better than you think. You are a whole lot bigger. In many cases, up to ten times bigger. If you are anything like the man in this story, you might be 500 times bigger.

I tell you this unremarkable story to go a little beyond normal petty ‘talks’ and articles about goal setting and visualisation. It’s also a different perspective from the typical rhubarb about the so-called ‘law of attraction’. I find all that stuff very small minded.

LESSON 1: Ten times bigger is a hard think for some.

I recently spent time with my second cousin Bill over an Easter long weekend. We spoke a lot about our mutual great great grandfather, James Cobbledick, born in 1810.

He emigrated from Devon in 1839, embarking on the three or four month sea voyage to South Australia on HMS City of Adelaide.
He had time on board to carve an elaborate ivory handled walking stick which is in the dungeons of the SA Museum.
He had time to think. I wonder what he thought about.

You don’t get bigger straight away

His was a bigger decision than anyone in his village was making, to head out to the great unknown world from the tiny village of Wembley in Devon. A BIG decision. Rough seas, sea sickness, possible ship-wreck, on-board disease, uncertain food supplies in the new colony, dangerous (as they thought) ‘natives’, loneliness, and nothing but his own wits with which to get ahead.

Being a mere mortal he must have wondered what lay ahead of him. I doubt he had Bill or me in his mind. He must have reminisced about home and family left behind. Like all of us, he had no idea about the effects of his adventure. But one thing is for sure, although an ordinary unskilled labourer, he was an adventurer and a bigger-than-normal thinker.

When he arrived, he took up work as a farmhand and gardener with the Police Magistrate, Captain O’Halloran. 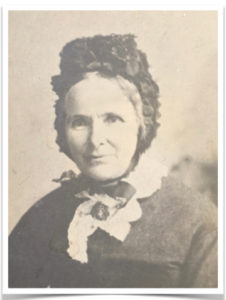 Two years later, a young couple (Mr and Mrs John and Lucy Palmer) arrived with promise of work with Captain O’Halloran, but soon after setting up home, John died.

Within two years James and Lucy were married. I can’t imagine that they thought any more about life than putting one foot in front of the other and managing their subsistence. In time they moved to become famers at Uraidla in the Adelaide Hills. See? Just a step at a time.

James and Lucy had seven children.

James sold his produce in the East end of Adelaide near today’s Botanic Gardens on market days.

LESSON 2: Think beyond your own life-time

180 (bigger)years later. How often have I wandered through the magnificent Adelaide Botanic Gardens gardens and wondered who’d had the foresight to lay them out and plant so many grand trees under whose shade they would most likely never sit. I have wondered many times what kind of people they were, let alone who they were.

Imagine my unbounded joy when cousin Bill read me this account.

James was invited to join a committee with the designer George Francis to lay out and plant the Adelaide Botanic Gardens. James hauled rich soil from the hills to give the gardens a good start.

Wha-a-a-a-a-t? My great great grandfather was one of the heroes of the Gardens? Talk about great oaks growing from little acorns!

TALK ABOUT BEING TEN TIMES BIGGER THAN YOU THINK!

We traced back to our mutual great grandfather and lost count of his descendants at 70 and went to bed. There are more. Each of his siblings produced about as many descendants. And that doesn’t take into account the descendants of his uncles and aunts – his cousins (the children of the original James and Lucy).

Among that vast number are (so far as we could recall) teachers, farmers, market gardeners, business owners, millionaires, writers, chairmen of councils, Justices of the Peace, actors, television actors, singers, bank managers, electrical engineers, firemen, tennis champions, fishermen, wool merchants, hairdressers, designers, mums, dads, grandmas and grandpas. There’s even a Hippie. And we can say very happily that they are all pretty good people.

How many trees, flowers and orchards – or whatevers are in your future, hiding away there to become ten times bigger than you think?

How many wonderful descendants are in your future, hiding away there to become ten times bigger than you think?

Your life might not all be about YOU, you know—your income, your retirement, your luxury holidays, your house, your investments, your fame, your glory, your depression, your loss, your sadness, your self-doubt, your fear. You might be here like James Cobbledick, having only one or two purposes, just a seed planter. There’s big joy in that; ten time bigger at least.

You are ten times bigger than you think.