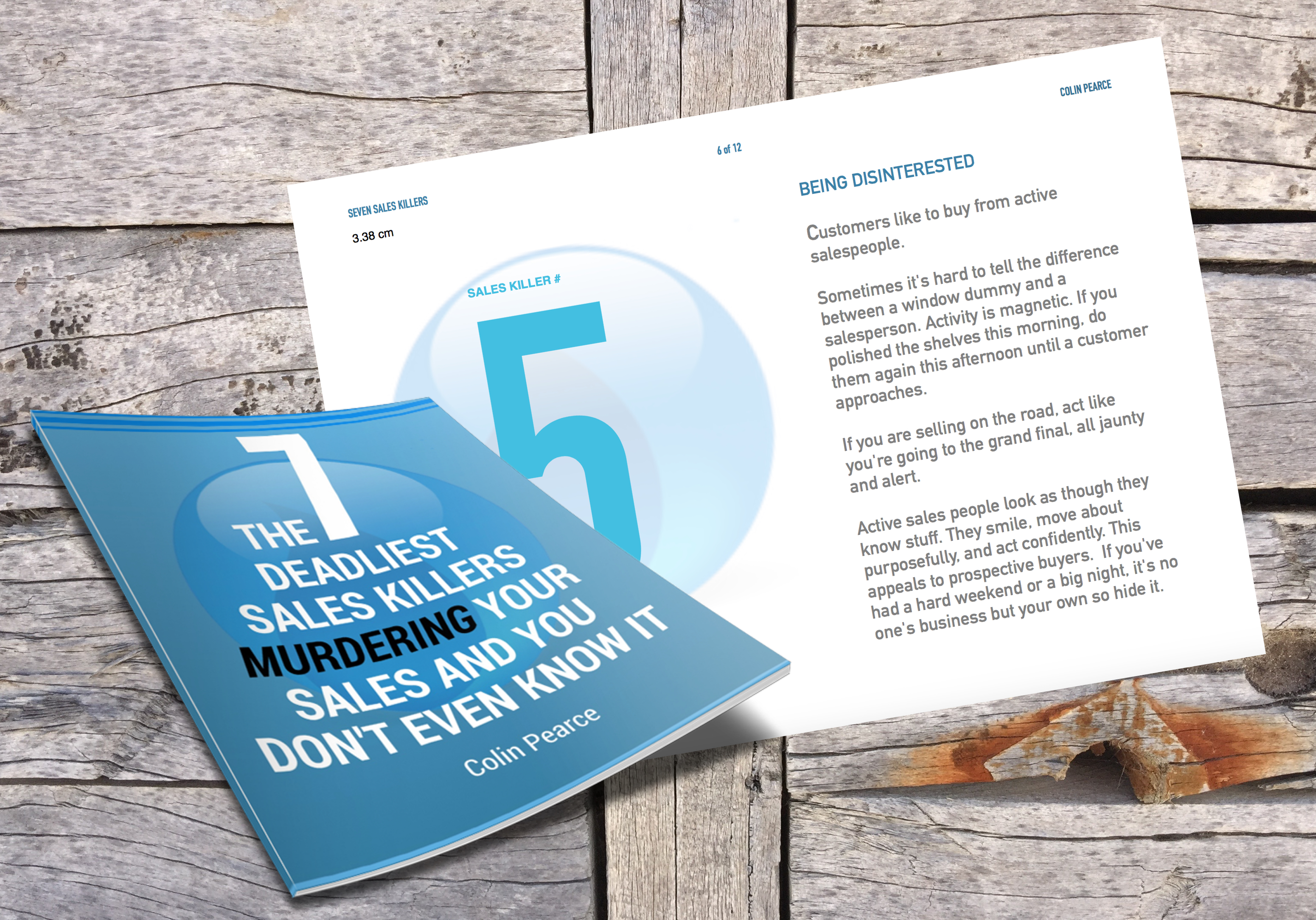 Talk about being disinterested!  I popped into a B-I-I-I-I-I-I-G name hardware store to price up a cordless drill. I approached the power tool desk and interrupted the salesperson placing price labels on placards at the rate of one per yawn. His store overalls were perfectly pressed, he wore his hair with a flair, he had spunky spectacles and swish loafers. He looked dashing. I asked him to point me in the direction of the drills, and that’s what he did: he pointed and said, ‘They’re somewhere down there’, and went on with his sticking.

Being disinterested is theft

When you are disinterested in your customers, and your job, you are a wages thief. Asking to be pointed in the right direction is known as a ‘buying sign’ by the way. You’re supposed to take the hint and lead your buyer to the exact spot and ask if there’s a question you can answer and even ask the buyer some appropriate drill-use-type questions and believe it or not, get the sale.

Being disinterested is selfish

Later I approached a woman in a sales outfit, puffing a bit and taking a glug from her juice bottle. I gave her a bit of cheek about consuming suspicious liquids on the job, and she came back with a retort about not sharing any with me. I asked her to tell me about the best drill for my purpose. She got right to it. She asked half a dozen questions knelt down to the lower shelves, clambered up to the top, peeked and poked behind boxes and encouraged my choices. I got what I needed. Mid-stream the first man approached and announced he was off for a smoke to which she only responded with a sniff and I muttered to her, ‘Bubba don’t know diddly.’

She made a growling sound and snorted, ‘Tell me about it. We’re short staffed today so his manager sent him to me. Now it’s worse than if I had no help at all. He likes being on the checkout desk where he doesn’t need to know anything. He hates being moved so he’s putting on a pout.’

Apathy is the glove into which evil slips its hand. (Bodie Thoene)*

Being disinterested is destructive

‘Bubba’ had robbed my salesperson of her joy at work. He’d dulled the atmosphere. He’d become a distraction. He put me off as well. And it appears that his manager and the other team members are supposed to put up with him, carry him, cover for him and compensate for him. Charming! I think If I were his boss I’d be fairly disinterested in paying him.

People get disinterested in selling when:

Ooh! Look! It’s all about management!

So what do you do?

If you’re in management with disinterested salespeople, get some help. [Hello-o-o-o-o. I’m available. Look this up.]